Eight young persons living with disabilities who have followed and completed a six-month vocational training programme, have been rewarded for their achievements and hard work.

Ibrahim Dodin was rewarded for his outstanding performance as well as for being the best overall performer.

Ibrahim, who has worked in various organisations doing a variety of jobs, also has a keen interest for front office duties and is currently working at Ceps.

For the past four years Ibrahim was a store assistant at the Ministry of Education but unfortunately he lost his job after the URS scheme was abolished and he was not considered for permanent employment by the ministry.

Most of the other members of the group suffered the same fate. Andy Labrosse also found himself without a job after working 12 years as a storekeeper at the Vocational Training Centre at North East Point.

The six-month training was conducted by GEM Consultancy in collaboration with the Ministry of Employment and Social Affairs and with the support of the Seychelles Tourism Academy (STA) and the Seychelles Institute of Distance Learning (Sidol) which provided Creole lessons.

GEM Consultancy offers training for people living with disabilities so they can join the world of work and be independent citizens.

The award ceremony at the Green House Restaurant at Au Cap on Friday was held  in the presence of the Minister for Employment and Social Affairs Patricia Francourt, First Lady Linda Ramkalawan, principal secretaries for employment Jules Baker and for family affairs Clive Roucou, MNA Naddy Zialor, the director of  STA Terrence Max, among other guests and family members of the eight students.

The executive director of GEM Consultancy, Marie-May Leon, said the aim of the training was to give the group of young people living with certain disabilities an opportunity to develop their potential, live a decent life like all citizens and bring their contribution to society.

“Often it is the general belief that this group of people are incapable of doing much but we feel that  they are capable and have lots of potential and through the training programme, we focused on their abilities and provided them with life skills and prepare them to go out in life full of self-confidence,” Mrs Leon said.

She noted that it was not easy and at times they were discouraged and even the parents were not keen about the programme but Mrs Leon said the trainers never lost hope and continued to push the students.

She noted that for the last three months seven of them, based on their interest,  followed training at the STA – four of them in front office, two in housekeeping, one in kitchen while one student with keen interest in photography pursued training in that field. Ms Leon affirmed that they all did very well in their respective training.

Minister Francourt congratulated the students for their determination, commitment and accomplishment noting that the fact that they were being rewarded on the International Day for Persons Living with Disabilities makes it a double celebration for them.

“The day also reminds us all that you have the same rights as everyone else and that you should be treated with dignity and respect that you deserve. It is also a time for us to reflect on what we are doing for this special group of people to ensure they are living their life to the maximum and that they are well integrated in society,” Minister Francourt noted.

She further affirmed that her ministry and its partners are committed for this to happen and they will give it all their support. She noted that the department of employment’s collaboration with GEM Consultancy is to give them training to better prepare them for the world of work and even start their own small business initiatives.

Minister Francourt has called on the group to be an example for other disabled people as well as those abled ones whom many of them often do not seize development opportunities that society offers them.

“My greatest wish now is for workplaces to welcome you and give you equal opportunities to earn a salary to have a living standard that you deserve as a citizen so you can depend on yourselves,” said Minister Francourt.

She has called on each ministry to consider employing a disabled person thus making a big difference in their lives.

For his part Mr Max noted that the STA is proud to be associated with the training initiative. He told the graduates that they have all the reasons to be proud of their achievements because they have shown positive attitude, determination and passion which are the reason for their success and recognition.

“Your achievements today is testimony of the STA’s commitment to ensure that every person irrespective of their differences and diversity feel welcomed and supported in their effort to develop oneself be it for their career progression or their personal satisfaction,” said Mr Max.

He went on to announce that the STA will be offering the opportunity for two of the best graduates to enroll on two full-time courses starting from the academic year 2022.

“We are also engaging with our trade partner, various hotels including Four Seasons, Ephelia, Hilton and we already have some positive feedbacks that they will engage the students further in training or secure employment for them,” Mr Max said.

Most of the graduates have speech difficulties but they all expressed their joy and happiness for this great achievement in their life and they had words of gratitude to everyone who believe in them, supported and encouraged them all the way. 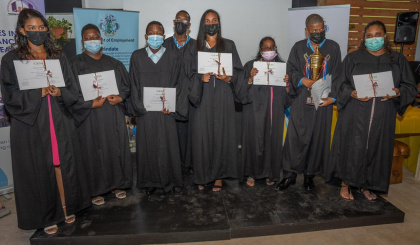