The staff of the Ministry of Lands and Housing has embarked on a series of productivity education programme facilitated by Marie Vonne Francis at the Productivity Unit in the department of employment which will run through several weeks.

The six-week programme was officially kicked off yesterday by Minister for Employment and Social Affairs Patricia Francourt during the first productivity workshop.

It also forms part of the wider ‘Workers Productivity Education Programme’ being spearheaded by the employment department in collaboration with key stakeholders as part of its goals and strategies to improve productivity nationally.

Over 15 staff of the Ministry of Lands and Housing participated in yesterday’s workshop and these varied from communication officers to architects to secretaries and to land and housing officers.

The majority of staff at the ministry will benefit and participate in the programme including those on management level.

The aim of the programme is to boost productivity within the Ministry of Land and Housing which often faces public pressure to deliver.

In her speech to launch the training programme, Minister Francourt acknowledged these challenges and pressure which staff of this ministry encounter on a day to day since they are at the forefront of the mammoth task of providing housing and land to Seychellois.

“I am convinced that this session will bring great benefits to your organisation,” Minister Francourt started.

“The direct link between increased productivity, improved performance, efficiency and effectiveness of businesses and government has been the subjects of discussions in many workshops, seminars and conferences before. It is a well-researched, recognised globally, proven to be the key to attain economic growth.”

Minister Francourt noted that the outcome of a study undertaken in Seychelles in 2011 through 2015 indicated a minority in the workforce which is not productive and attention was also drawn to abuse of sick leaves, non-exemplary behaviours and attitude as well as under performance.

“The ministry is therefore pleased to give support to this session where the objectives are to educate and sensitise both the employers and employees to adopt best practices and promote positive work attitudes and developing a new work culture to boost labour productivity,” highlighted the minister.

The session was led by Marie-Vonne Francis, the head of the Productivity Unit. 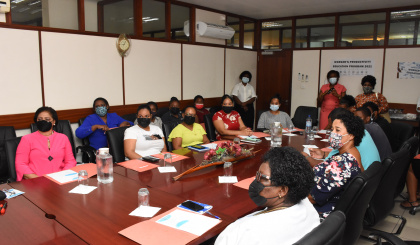