A group of women who successfully completed a three-month sewing programme facilitated by the Ministry of Employment and Social Affairs and led by Women in Action and Solidarity (Waso) were commended for their resilience and perseverance by Minister Patricia Francourt.

This was during a certificate presentation ceremony held yesterday at the Ceps boardroom which was followed by an exhibition of the participants’ works.

The participants that were placed on the programme had been identified by the department of employment which has provided funding and support for the sewing classes.

Minister Francourt told the participants that their efforts to learn a new skill showcases their resilience as women and mothers, adding it highlights that it is never too late to learn.

“I am very proud of you as women and it is important for women to help women[…] The employment department has a number of re-skilling programmes and PS Baker and his team are always finding what is on demand and what courses are available such as computer classes. So it does not stop here and you can all continue with another reskilling programme. This money has been budgeted by the government to ensure that we reskill our people,” stated the minister.

Mrs Elizabeth also congratulated the group of women for their perseverance especially since several of the women chose to bail out of the workshop, even though they were being provided with assistance such as free SPTC smart cards.

Zita Benoit, who was one of the workshop’s best performers, said she was referred to Waso’s sewing workshop when she approached the employment department to register to get a new job.

Ms Benoit said that she had dabbled in various fields and jobs throughout her career, from receptionist to cleaner, and she was enthusiastic to embark on a new journey.

She explained that skills such as learning how to sew using a machine is very good to have as she can now tailor clothes, curtains, cushion covers and so on.

“The lady who facilitated the workshop has helped me get a sewing machine and I’ll see where I can go from there,” stated Ms Benoit. 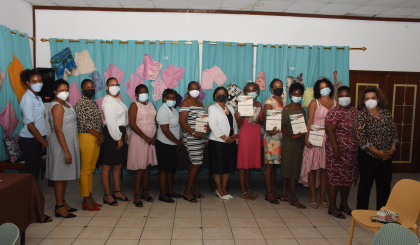 The group of women who took part in the workshop in a souvenir photograph with Minister Francourt (Photo: Louis Toussaint)