Women parliamentarians get ministries’ support in fight against sexual violence

Sexual and gender-based violence refers to any act that is perpetrated against a person's will and is based on gender norms and unequal power relationships.

It includes physical, emotional or psychological and sexual violence, and denial of resources or access to services.

Sexual and gender-based violence (SGBV) inflicts harm on women, girls, men and boys and is a severe violation of several human rights.

It is an issue which tops the agenda of the local women parliamentary caucusand as legislators they are committed to fight and try to put a stop to the situation which persists in our small country.

After seeking the support of higher authority, the group now has the support of two governmentministries to help find the best solution through the most suitable projects.

The Ministry of Employment and Social Affairs, along with that of Youth, Sports and Family are now permanent partners of the women’s caucus in coming up with a suitable project, in the form of a halfway home which will benefit local SGVB victims.

Funding for the proposed project is from a European Union grant through the Southern African Development Community (SADC), under the Support to Peace and Security in the SADC Region Programme (SPSS).

In a meeting held yesterday at the National Assembly building at Ile du Port, Minister for Employment and Social Affairs Patricia Francourt, along with her counterpart for Youth, Sports and Family, Marie-Celine Zialor, met with the women parliamentarians led by Regina Esparon elected member of the National Assembly for Glacis, to discuss the worrying issue, their plan and the proposed project.

After going through the proposed project, the ministerial delegation suggested that a more combined effort is adopted, while a more thorough research and study is carried out to better assess the problem and the need of the victims as well as the feasibility and efficiency of the project.

Minister Zialor noted that the project should be action-oriented and should cater for family preservation.

It was also pointed out that some setbacks in the local legislation has permitted the issue of SGBV to escalate, therefore further discussions on proposed laws on sexual and other related offences are necessary.

Since a halfway home is to provide accommodation to women and women with children who are experiencing family violence, it is therefore essential to come up with strategic proposals on how to go about with the process, especially in the long run, since there are a lot of related issues attached.

It was also agreed that a longer and more detailed session will be organised so that all parties involved will have sufficient time to brainstorm and come up with the best possible solutions.

The SPSS has made progress in implementing scheduled activities designed to strengthen SADC's peace and security architecture.

It was initiated on November 21, 2018 following the signing of the Pillar Assessed Grant or Delegation Agreement (PAGODA) between the European Union (EU) and the SADC secretariat. 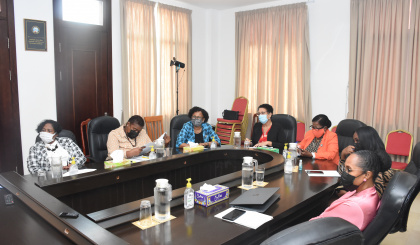