Employment remains a key problem in the agricultureindustry in Seychelles and this was made evident by the 11 visits conducted by the Ministerfor Employment and Social Affairs, Patricia Francourt during the past weeks.

The minister has committed herself to push the industry forward through several discussions that will help analyse where the problems in agriculture lie.

In the last leg of her visit on Friday, the minister visited three farms at Anse Royale and Val d’Andorre. She was accompanied by the Minister for Agriculture, Climate Change and Environment, Flavien Joubert; principal secretary for employment, Jules Baker;principal secretary for agriculture KevenNancy; director general for employment programme, Letimie Dookley; director general for labour relations Steve Monnaie; chairman of the Agricultural Production Association Seychelles (Apas) Barry Nourrice; and staff of the two ministries.

The aim of these visits is to understand the farming environment to have targeted strategies to encourage more people to join the sector.

Her first stop was in the sub-district of Val d’Andorre in Baie Lazare where she visited André Payet's poultry farm. Mr Payet has five foreign workers and two Seychellois and noted that getting locals to come work at his farm is a hassle as they are not serious, so he has to employ foreigners which is costly.

“I welcome young Seychellois to take up farming as a profession, no one knows our climate and our terrain better than us, so it’s frustrating that we have to bring in foreigners to work on our farms,” he said.

Another point he made was in regard to unity between farmers as he feels that big farms and smaller farms should support each other especially when it comes to selling their produce.

The next two stops were at Anse Royale, where the ministerial delegation visited the farms of André Pool and Jacques Matombé.

Both farmers echoed the same concerns as Mr Payet when it comes to hiring Seychellois workers, noting how unreliable local workers are, adding that there are days when they do not even work which results in farming operations lagging.

They also expressed confusion in regard to the chartered flight that will soon be provided to fly theirworkers on gainful occupational permit (GOP) to Seychelles, stating that they do not know how procedures will be conducted and what type of flight they will get.

These concerns were answered on site by Mr Nourrice.

The Geffroy Farm was the last the delegationvisited and they were first given a tour of the farm by the owner Jean-Paul Geffroy.

They were able to see the innovations that Mr Geffroy has brought to his farm such as an irrigation system to avoid flooding and his various greenhouses. They also visited the sleeping quarters of the Bangladeshi workers at the farm and noted that the area is conducive, and the workers’ needs are being met.

Mr Geffroy also expressed the same concerns regarding unreliable Seychellois workers and spoke to Mrs Dookley regarding the amount of time it takes to renew the GOP offoreign workers as well as the qualities of applicants the ministry sends to his farm looking for jobs.

After the visits, the two ministers sat down with the press and gave a run down on the series of visits they have been conducting.

“The last weeks have been an insightful journey as we got a chance to see the type of work each farm is doing as well as the type of manpower they have,” said Minister Francourt.

Adding to that she said “each farm has its own needs. Today I got a chance to see from the beginning to end the concerns all four farmers have, and we have reaffirmed with them that we will support them and take their concerns seriously.”

The minister also acknowledged the points raised regarding local workers and said they would love it if local workers joined the farming industry and push it forward. However, it is not an easy thing to do.

“In previous visits we saw the difficulties the farms are facing when it comes to employment and we have realised that it doesn’t matter if you have a big farm or a small one, they all share the same problems,” continued Minister Francourt.

She expressed her wish to put agriculture on a greater platform than it is today, and she committed herself to pushing the industry forward through several discussions that will help analyse where the problems in agriculture lie.

“We have also seen the conditions of workers during these visits, and we were able to see if their living and working conditions are favourable,” she noted.

As for Minister Joubert, he added that these visits serve an important purpose as agriculture is not only the responsibility of the Ministry of Agriculture, Climate Change and Environment, but several other entities and ministries as well.

He continued by saying “I am in discussions with the minister responsible for lands, Billy Rangasamy, regarding allocation of industrial land to find potential sites to set up an agro-processing and distribution site to further the development of agriculture in the country,” said Minister Joubert.

Furthermore, he said the role of his ministry is to bring together all concerned partners to offer farmers support and help them solve their problems so that they can continue to invest in the country.

Some other concerns raised touch on training students receive so that they can get the proper knowledge when they come to work on the farms.

Minister Joubert said training starts in school and they will find ways to integrate it in the curriculum.

The accompanying photos taken by Joena Meme show the ministerial delegation during their visits at the four farms. 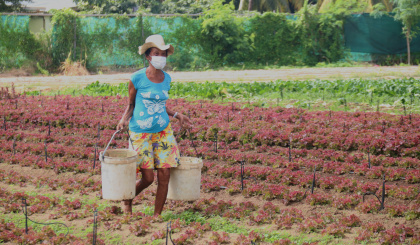 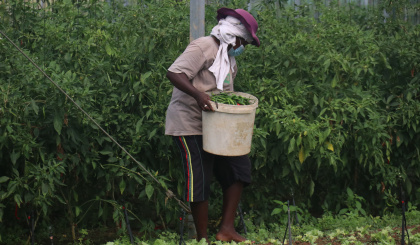 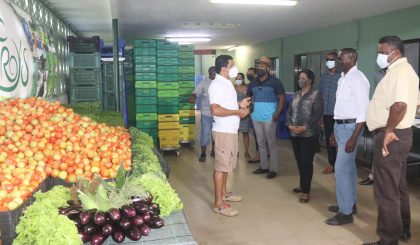